OK guys, we’ve checked quite a bit off the list (there are still ∞ items left which are not on this list) and added a few we left off ( and them checked them off =] ). Designing a 3D MMORPG in Browser is no small task my friends! We are pretty happy where it is at currently. Still more to do!

We added music for Emelines house. It’s the same as the taverns for now  but better than nothing.

There was a pretty big bug in the NPC aggro range detection. This has been fixed.

I had a hard time reproducing a problem where players were getting stuck on walls and doors in smaller zones. This has been fixed after I finally got it to break for me.

The loot box (off of dead NPC’s) now closes when there are no more items for you to collect or roll on. Just a little convenience feature =]

I’ve been wanting to auto add newly learned spells to the spellbar for A LONG time now. I finally got around to that.

An upgrade to version 72 of the 3D library we use (three.js) caused a couple minor visual bugs and an annoying issue where we were forced to use inefficient geometry for certain models. This has all been fixed after working with them for a bit. Thanks guys! 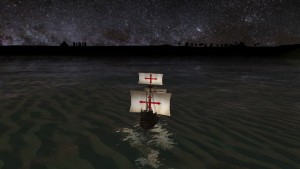 Also the three.js particle plugin was excellently updated for version 72 as well. Now ALL geometries are of the high efficiency, low-memory footprint variety YAY!

Well that’s it for now folks. We will update you all again when there is significant progress to report. Happy grinding!