The new temple we have been working on for quite some time has finally been released! 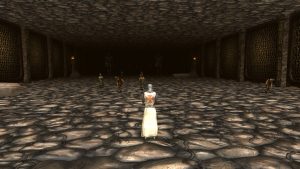 Slay the undead and ancient demonic protectors in the catacombs beneath Hallengard. If you are strong enough you will descend even further into the lair of an unspeakable evil!  Yea.. we know you want to check this out =]

We even have a little preview of the next temple:

An inter-dimensional plane of existence inhabited by powerful sorcerers and other magic beings. We though this Browser MMORPG should take a step away from rotting flesh eating zombies and disgusting mutant creatures and move towards an enlightened environment filled with powerful magic and weapons of great intellect. Fun stuff.

There have been dozens of optimizations and improvements and as usual I can only remember a few of them. These are as follows:

Well that’s it for now. The next zone and temple are nearly complete so stay tuned for further updates to your favorite Browser MMORPG – Titans of Time!